What is the Future of UK Vehicle Fleets?

Even before coronavirus went from unheard of to a top ten Google search query, most people involved in the fleet industry – from owners, to manufacturers to insurance providers - knew that 2020 was going to be a big year. As 2019 drew to a close so more and more fleet managers were adding electric vehicles to their lists – with a concomitant increase in the number asking about electric vehicle fleet insurance – as demand for tax-free driving rose. Discussions on Clean Air Zones (CAZ) were moving from 'What do we do if they come…?' to 'How much are these going to cost us and how can we ensure long-term accessibility?' and what the death of diesels meant for the industry as a whole. Change was on its way and fleets large and small were braced for a new way of going about their business. But then the coronavirus reared its ugly head and change came, but not in ways anyone could have predicted.

Now, in November, with fleets returning to our roads and business getting back to (the new) normal, discussions on the future of fleets have started again. This time, however, there are new challenges being deliberated including the rising tide of autonomous vehicles, the end of vehicle ownership and even the end of fleets as we know them.

In this new blog from Policyfast, the UK's leading online insurance wholesalers, we'll look at these issues and try to answer the all-important question: What is the future of UK vehicle fleets? 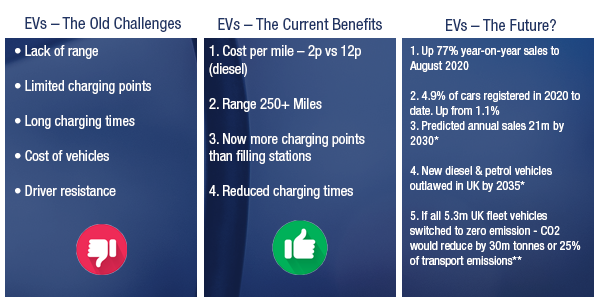 Electric Vehicles: The Only Way To Go?

Electric vehicles (EVs) have been the 'next big thing' since the VW 'dieselgate' scandal broke in 2015. For an industry that was almost entirely reliant on diesel power, the revelations and the often-pernicious tax penalties that followed were enough to give even its staunchest advocates cause to think twice. Initially managers and drivers simply switched to petrol versions of the same models and petrol became the dominant fuel source. More farsighted fleet managers attracted by the lure of sustainability and lower costs looked into EVs only to be confronted by the following barriers:

Despite claims of significantly lower costs per mile – 2p vs 12p for a diesel according to JCT600 – these barriers proved too much for most and EVs remained an idea for the future or a niche addition to company's line-up.

Fast forward to 2020 and the world is very different place. Diesel's have lost their crown as the most popular fuel for fleets, manufacturers such as Volvo are closing diesel plants and discontinuing diesel models, EVs and hybrids are the flavour of the month and traditional barriers to adoption have fallen as:

While we are not living in a world of EV fleets yet, they are certainly on the way. Deloitte, for example, predict that sales will rise to 21m per year by 2030 and come 2035 sales of new diesel and petrol vehicles will be outlawed in the UK.

The trend toward EVs has been clear from sales figures for sometime now. While they have come from a low base, their recent sales growth has been impressive. According to Driving Electric, EVs saw a 77% year-on-year sales increase in the crucial month of August and accounted for 4.9% (44,708) of all cars registered year-to-date – up from just 1.1% during the same period in 2019. While this growth is being predominantly driven by private buyers, fleet managers are definitely getting in on the act. With company car drivers paying no tax this year on pure EV and with brands conscious of their carbon footprint and customer perceptions, so more and more are adding them to their lists. This is important, not least for the environment. An Office for National Statistics report in 2018 stated that if all 5.3 million fleet vehicles were to switch to zero emission models, it would save as much as 30 million tonnes of CO2, around 25% of all UK transport emissions.

While slower off the mark than the car sector, the electric commercial vehicles (eCV) and truck markets are set to be key growth areas in the 2020s. There are 6.4m commercial vehicles on Britain's roads according to the Department of Transport (DoT) and a move to electrically powered models would be a significant change. Historically models have been thin on the ground, but now Renault, Ford, Vauxhall and Nissan all have electric vehicles on the market. While these are currently more expensive than their traditional counterparts - Renault's Kangoo Z E 33 list price, including the plug-in grant, is £23,232 vs £15,850 for the diesel - the running costs are significantly lower. The DoT estimates that the cost of charging a standard electric van such as a Nissan e-NV2000 is around £1.50 and on that you'll be able to drive for around 100 miles. Depending on what you are paying for diesel, it would cost you somewhere in the region of £12 to do the same with a traditionally powered CV.

Running cost savings are one of the main reasons why eCV are catching on and another is accessibility. The UK government has failed to meet its international commitments on clean air and with an estimated 50,000 premature deaths in the UK linked to pollution, they have been forced to take action. Cities including London, Birmingham, Bristol, Oxford, Leeds and Glasgow all either have vehicle charging in place or have plans to introduce some sort of 'Clean Air Zone' (CAZ) to restrict polluting vehicles. Bristol has gone as far as to ban some altogether and Oxford is considering a similar move. For many fleet owners – particularly couriers, taxi drivers and hauliers – loss of access means loss of business and if the only way to prevent that is to go electric, then they may have no choice.

Even trucks and special type fleets are being affected by these changes. Tesla and Daimler have electric trucks already to roll and Ford, amongst others, are creating EV versions of even their heaviest lorries. Tesla – of course – are looking at automated models, while Daimler is looking into hydrogen powered trucks which are even more environmentally sound than EVs. Make no mistake then, the power revolution will engulf all fleet markets, not just cars.

The End of Ownership?

When John Zimmer, ride sharing service Lfyt's CEO, said that private car ownership would be dead within 10 years many in the car and fleet industry dismissed his claims. They did so for two reasons. Firstly, it was based on us all using self-driving cars, and secondly, Lyft's future prospects rather hinge on people abandoning their own vehicles in favour of hail and ride alternatives. Since then, however, other voices have echoed his sentiments. A Business Insider poll of nearly 1,000 motor industry executives revealed that 60% believed 50% of current car owners would lose interest in ownership by 2025.

Such a development has sobering implications for many – not least for fleet insurance providers. There's been a trend in the industry toward 'fleet mobility' (the use of a mix of company vehicles, hired vehicles and public transport) for some years now, and in the post COVID-19 era with more people working remotely its arguable that this trend will be accelerated. That, however, is to overlook the necessity for many companies to move people from location to location on-demand and to places other than urban centres that are served by the likes of Lyft and Uber. While private car ownership may be set to wane, we're confident that we'll have brokers looking for great value fleet insurance for many years to come.

What is the Future of UK Vehicle Fleets?

The future of fleets in the UK can probably be summed up as electrically powered, centred on a smaller number of industries (but with larger fleet), more technologically integrated and greener. The 2020s will see the greatest levels of innovation since the days of Henry Ford. Driverless vehicles – including trucks – will come, as will other alternative power sources such as hydrogen. New diesels will dwindle and die, petrol will follow their wake and we'll all drive less as the 'new normal' becomes simply normal. It will be fast-changing, disruptive, fascinating and ultimately to the good of all. 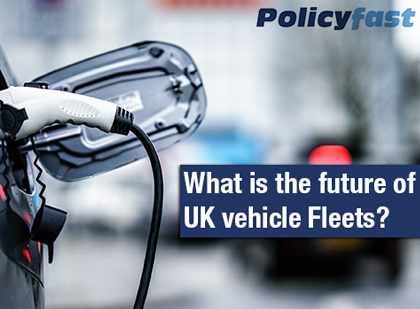 Older Back to news articles

© Policyfast - Authorised and regulated by the Financial Conduct Authority. Ref 448039